The Next Big Thing (hopefully!)

The delightful Jenn J McLeod tagged me *ahem* some time ago to take part in the Next Big Thing meme. She also roped in Lily Malone, Cate Ellink and Allison Tait.

To be honest, I feel like I’m here under false pretenses as they all have debut novels out this year and I … well … I don’t.  Yet. (Hear that, universe?!)

1) What is the working title of your current/next book?

I’m hopeless at titles. The finished work that I’m about to start querying is called ‘Sisters’. My current (very new) WIP is tentatively called ‘Birthday Wishes’.

2) Where did the idea come from?

Who knows? When I first started writing, I attempted to write a category romance. But these two characters  kept bugging me – they were estranged sisters and wouldn’t let me rest until I wrote about them and discovered why they were estranged. I never did finish writing that category! (although I may steal the heroine for another book!)

3) What genre does your book fall under?

4) What actors would you choose to play the part of your characters in a movie rendition?

I always had a slightly unfit Rachel Griffiths in mind as one sister, and someone sleek and polished as the other sister. (Any suggestions?)  One hero was always David Wenham and the other was a younger Hugh Jackman. (he gets around a lot that man – always plenty of work being cast in our books!)

5) What is the one-sentence synopsis of your book?

Sorry, I had enough trouble getting it down to this – I can’t do one sentence (unless it’s a very long run-on sentence!)

‘Sisters’ is the story of Helen, staying in a destructive marriage for the sake of the kids, and her estranged sister Toni, whose life is undergoing a major upheaval. Will their reunion be destroyed by family secrets or will they have the strength to find their happiness?

6) Will your book be self-published or represented by an agency?

I’m going down the traditional route of trying to find an agent or publisher.

7) How long did it take you to write the first draft?

I started writing it in August 2011 – immediately after the Melbourne conference when Bob Mayer asked the question that gave me my epiphany. ‘If you died right now, would the book that you’re writing now be the one that you’d want to be known for?’ (roughly paraphrased!)

I was about 10,000 words in when feedback from the 2011 STALI competition convinced me I’d started the story in completely the wrong spot.  So I put that aside and started the story all over again in Dec 2011.  I wrote The End on a very dirty draft in July 2012 (thanks mainly to 50K in 30 days in June!), and finished getting it into a readable shape in early Jan 2012.

8) What other books would you compare this story to within your genre?

I’m inspired by great Aussie writers like Dianne Blacklock and Monica McInerney, and overseas authors like Cathy Kelly. So I think its similar in style and content to those.

9) Who or what inspired you to write this book?

The characters – they wouldn’t leave me alone. It was also the realisation that my dream of ‘one day I’ll write a book’ actually required me to work at it so I’d better get started 🙂

10) What else about the book might pique the reader’s interest?

One of the heroes is a sexy Aussie farmer 🙂 (That would be Hugh Jackman if you want to picture it! Here – I’ll help…) 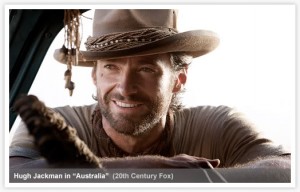