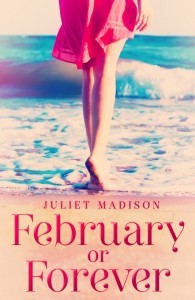 In this heartwarming coastal romance, Escape bestselling author Juliet Madison asks, what if your favourite celebrity fell in love with you?

Yoga teacher and single mother, Chrissie Burns has a plan: move into the rundown beach house left to her by her deceased aunt, renovate it, sell it, and move on. The scene of a terrible accident years ago, the house needs to get out of Chrissie’s hands as soon as possible.

But Tarrin’s Bay, where the house stands, has more to offer than bad memories. The town is lovely, the people friendly, and even Chrissie’s young son finds friends and begins coming out of his shell. Employed at Serendipity Retreat as a yoga instructor, Chrissie is shocked to be given the role of private teacher to Drew Williams, Australia’s top singer/songwriter for the month.

Relationships between instructors and clients are strictly forbidden, but Drew draws happiness out of Chrissie with his down-to-earth nature and sense of humour. Days of stretching and bending may bring Chrissie unexpected peace and strength, but she knows that this interlude must end, and there’s no pose or position to aid her when Drew walks away and leaves her broken-hearted.

‘I’m exhausted.’ Kai practically fell through the front door after school and kicked off his shoes, leaving one in the hallway and one in the living room.

‘Kai, can you please put your shoes away in your room?’ No sooner had the words left Chrissie’s mouth than Kai had flopped on the couch, his face squished sideways into a cushion. Chrissie sighed. ‘Kai, shoes first, then you can rest.’

‘Oh, but Mum. You don’t understand. You don’t know what it’s like to be this tired.’ He strung out the last word with dramatic emphasis.

‘Oh for heaven’s sake.’ Chrissie bent and hooked the heel of one shoe on her finger, then the other, and flung them into her son’s room. At least they were out of the way; he could put them in the wardrobe himself later. Chrissie picked up Kai’s school bag that he’d dumped next to the couch, and chuckled. Don’t know what it’s like to be this tired? She shook her head at her son’s naivety. Granted, he was only six, but if only he knew. Getting up five times a night on average for the first year of his life? That was the definition of tired.

She plonked the bag on one of the dining table chairs whose seat cushion was tearing at the seams and exposing a chunk of foam, and zipped it open. She withdrew a drawing of what resembled a nasty looking angel and a few school notes; parent information night, curriculum summary and expected academic outcomes, and what do you know? A lice outbreak already and it was only the fourth day into the school year. Great, she’d have to get out the fine-tooth comb and magnifying glass and examine Kai’s head for the little critters. Why did school have to feel like a whole second job? Chrissie longed for the calmness of Serendipity, the peace inherently present within its walls, and the exhilarating buzz of being around…

Chrissie tipped her head back with a laugh. Kai was well versed in the health benefits that yoga provided. Although, when he was in preschool, she’d had to clarify her profession to him after he’d told a classmate that his mum was a ‘yoghurt teacher’.

‘Well, that wasn’t exactly what I had in mind,’ she replied, an image of Drew on top flashed in her mind before she flicked it away, ‘but since you asked so nicely.’ She left the school bag and opened the fridge, pulling out a carton of milk and a tub of yoghurt, then grabbed a box of frozen berries from the freezer. ‘One smoothie coming up.’

‘Yum.’ Kai pressed the remote on the television and a wildly colourful cartoon blared from the screen.

Glossy white milk seeped in between the clumps of berries as Chrissie poured it in the blender, followed by a couple of dollops of yoghurt. She held the cover closed as the blender whirred, whipping the ingredients up into a purpley-pink liquid.

‘Here you go,’ she said, handing Kai a plastic cup full of the mixture and placing a coaster in front of him on the coffee table. ‘Be careful though, no spills.’