Today I’m delighted to welcome Mary Costello to my blog – writer, reader, talker, poetry enthusiast. Enamoured of dark heroes and enlightened heroines. Plundering the foul rag and bone shop of the heart. And a gorgeous Irish accent to boot! 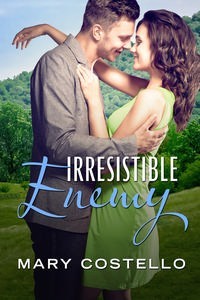 Welcome Mary! Please tell us, do you have a passion other than writing?

Ah Kerrie! I have many passions – from books, poetry and history to chickens, gardening and earrings. But the most relevant to romance is probably Australian Rules football, because it’s footy that got me into writing romance in the first place.

Okay I’m intrigued – was it the hunky guys, the tight shorts…? How long have you been a footy tragic?

I came to footy late, via my interest in architecture. I’d never been to a single sporting event in my life until, in 2005, a friend invited me to a game at the MCG. I’ve always loved round buildings and here was this magnificent arena that was a theatre, battlefield and a bowl of sound all at the same time. I went along to a second game and became interested in the on-field drama, the stories of the individual players and of the Collingwood – a club that somehow incites passion in the breasts of both its supporters an it enemies. I’ve been a passionate Collingwood barracker ever since.

It is a very impressive stadium, I will agree. Having known many Melbournians, supporting an AFL team a religion down there.  What is it about AFL that brings a sparkle to your eye?

It the combination of the physical excitement of a very thrilling sport with the constant intrigue and drama of the stories surrounding the game, the clubs and the players. As a woman past the first and even the second flush of youth, I’ve been very lucky to find a new passion that absorbs me so completely. There’s nothing quite like the excitement of game day. My heart starts thumping at the first siren and just keeps racing for the next three hours. I get so wound up that I find it hard to sleep after a game, whatever the result.

I started writing romances because I was bored in the off-season and wanted to keep mentally involved with footy. It struck me that the game was full of heroes with fascinating stories of struggle, persistence, brilliance, failure, success and – just as interesting – failure.

Do you have a funny story about something that’s happened to you while at the footy?

My friend Helen and I watched the 2010 drawn grand final between Collingwood and St Kilda from very prominent seats at the Sydney Myer Music Bowl. The game ended in a draw and the TV cameras panned around the crowd. While everyone else was sitting there utterly stunned or devastated, there I was in the middle of the screen, bouncing up and down like an idiot. I couldn’t contain my delight at the prospect of another week of footy.

Oddly, when Collingwood won the following week, Helen and I were so emotionally wrung out after the game that we sobbed through most of the celebratory concert, even while we sang along with Lionel Richie – All night long…

Can you share a photo of you indulging in your AFL passion?

Here I am with a couple of old Collingwood flogs. I’m the one who isn’t a ditzy blonde. 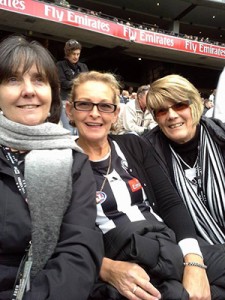 Finally, please tell us a little about yourself.

I’m an Irish-Australian freelance writer, and despite living most of my life in Australia, I haven’t lost my accent, or the sense of being somewhere exotic. I lives in Melbourne’s bushburbs with my husband of many years, who, oddly, bears no resemblance whatsoever to a romantic hero. The other members of the household are a flock of recovering battery hens and our two daughters, for whom I aspire to arrange advantageous matches to men of large property; but that project isn’t going too well.

My first novel, Titanic Town, Memoirs of a Belfast Girlhood, was published twenty years ago, but I only recently turned my pen to Romance, inspired by the heroics of the men of Aussie Rules football. The result was The Reluctant Wag the first book in the Yarraside Wolves and WAGs series. My second release, Irresistible Enemy, was a very different book. Set in the bushy fringes of Melbourne, it brings into collision a dedicated wildlife warrior and a high-powered property developer for whom ‘habitat’ means luxury houses.

Cassie Bowtell is a plain, no-nonsense girl, and Hart Huntingdon is a man surrounded by glamorous women, but Cassie attracts Hart with her courage, honesty and her dedication to the injured animals in her care. Hart stands for everything Cassie despises, and having been badly hurt in love, she’s determined to repress any emotional impulses that go against her better judgement.

Thank you so much for being my final special guest this year, Mary. Good luck with your Yarraside Wolves and WAGs books!