Today I released Letting Go into the world. Technically it went live last night, because I didn’t want it being late due to timezones. So I woke up this morning and my 1st thought was “I’m a published author!” Now I doubt my life is about to change because I’ve released one book, but it’s a big deal to me.

In 2009 I made the commitment that I wanted to write a book. It took a few stops and starts, a few changes of genre, but I finished my first novel in 2012. No matter how good I thought it was at the time, it will never see the light of day in its original format 🙂 Since then I’ve written another full-length (80K) novel, and 2 novellas (40K), of which Letting Go is the latest. It’s only been in the last 12-18 months that I’ve been finalling in contests and getting requests for fulls from publishers to make me think my writing is good enough to put out there. While I haven’t cracked a contract from a publisher (yet) – either print or ebook, hopefully that will be my next milestone. In the meantime I have plans to keep self-publishing – starting with my next release, part of the Bindarra Creek Romance series plus I have plans for at least 3 or 4 more novellas in the Hope Creek series.

It takes a village to write a book! While I’ve managed to acknowledge many people who have helped with Letting Go, there are so many more people who have helped me along the way. So if you’ve ever given me a supportive comment, taught me something new or just been part of this wonderful romance writing community I stumbled across – thank you! 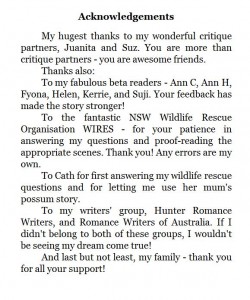