Big news!!! I’m going to be an Escape Artist! 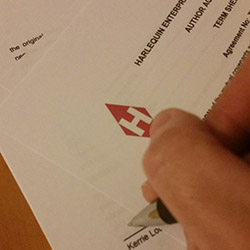 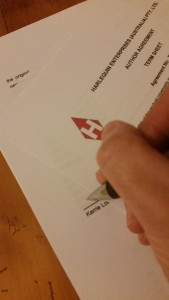 I am beyond thrilled to announce that I have signed a contract with Escape Publishing to publish my romantic suspense novel, currently titled Polly’s Patisserie (title to be changed).

Please bear with me while I tell this story’s journey – I’ve been waiting many years to finally have a call story!

In July last year, I wrote a short novella of around 27,000 words, and in the flush of love with my characters, submitted it way too early to Escape Publishing. It didn’t take too long for the rejection to come back, but with some helpful advice that it perhaps needed to be a longer story.

So I went away, took a few months, dramatically strengthened and deepened the story to bring it in around 40,000 words. In Feb this year, I emailed Kate to ask if she would be interested in seeing a revised version. She agreed to look at it, so off it went again.

In late March, I received a very exciting email to say Kate wanted to take Polly’s Patisserie to an acquisitions meeting. The result of which was they liked the story, but wanted it to be longer – at least 50K. Would I be willing to expand the story?

You bet I was! I hadn’t come this far to turn back now! Kate gave me great feedback on where she thought I had room to expand.

More editing, send it off again and more inbox stalking as I waited anxiously to hear.

On 7th July, I’d been to an appointment and was standing in line to use the ATM. I flicked idly through my emails on my phone (as you do) and saw one from Kate. Heart racing, I was next in line, so I thought no, I don’t have time to look. But a few seconds later, I couldn’t resist – I clicked to open it. The words “delighted to accept” jumped out at me.

And then it was my turn at the ATM. I was practically hyperventilating. I couldn’t remember my name, let alone my PIN 🙂 My hands were shaking as I finally remembered and then almost walked away without my money. I was in such a state!

As soon as I stowed my money away, I had to check yet again – and then showed my son to confirm the magic words did really say what I thought they said!

I’m absolutely thrilled that my over-40yo hero and heroine have found a home with Escape without once hearing the words “Maybe they should be younger”… And hopefully it’s the first of many more Escape titles to come!