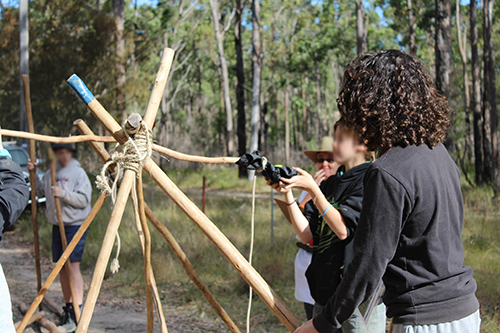 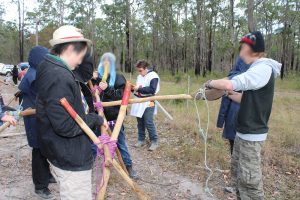 Over the weekend, roughly 450 Scouts from Hunter and Coastal region were dropped into the Wallaroo State Forest. Carrying full packs with all food, tents etc, patrols of between 4 and 8 Scouts had to navigate their way around the forest to four different Regional Activity Centres (RACs) based around a warrior theme. Each RAC had bases where Scouts carried out varied activities and were awarded points out of 100 for their efforts in areas such as how well the Patrol Leader led, enthusiasm, planning and carrying out the activity. Points were then tallied up and at the end of the weekend, shields were awarded to the most successful patrol and patrol leader.

I spent the weekend working on our medieval themed base. Scouts were told they had to defend themselves against the enemy by designing and building some sort of device to hurl flaming tar balls (aka tennis balls) eg a catapult, trebuchet etc. They were allowed to use wooden staves, rope and anything they could find around or on their person. The photo shows me in my fancy tabbard concentrating very hard on marking 🙂

It was so much fun watching each patrol work together to come up with a design, test it and tweak it. Some designs were far more successful than others but by giving them the objective only, they really had to work their imaginations to decide how to approach it. The problem solving going on was great to watch. And team work was a major plus in the overall success of their design.

After 3 RACs on Saturday (about 6 hours of activities), they made their way to the common area where they put their tents up, cooked dinner and had the option of watching a movie (Jungle Book). Some opted for an early night instead, while others were more interested in socialising.

Supervision was done on a roster basis by the 100-odd leaders, so other than my 2 supervision shifts, it was also great to be able to kick back around a campfire on Saturday night and chat with friends and like-minded people.

Sunday saw the Scouts packing up, before carrying out another RAC and finally closing parade.

It was an exhausting weekend for both Scouts and leaders, but judging by the fact my carload of Scouts didn’t stop talking about it the whole way home, I’d say it was a success!

So how did you spend your weekend? Anything as out of the ordinary as making catapults??!